Consider the following complaint to the BCCSA: “On 8 January 2015 between 18:00 and 18:30 during the airing of the comedy series Bad Teacher on Mnet, a Carte Blanche advertisement, graphically displaying the abuse of a Welkom nanny on a 7 month old baby was aired.”

Which of the BCCSA Codes regarding “Children” was violated in this instance? (1 mark). Explain your answer (2 marks).

There have been many notable instances where the SABC has proven itself guilty of self-censorship. Controversial cartoonist, Zapiro was set to have a television interview aired on one of the SABC channels, but after being filmed, the interview was later cancelled. Zapiro had previously been threatened with court action by President Jacob Zuma for depicting him in a bad light in a few of his cartoons. Speaking in the interview Zapiro said, “Even in the interview it felt like I was being pushed into having to say something positive about the president.”

Former SABC television presenter, Eusebius McKaiser, resigned from the SABC, citing government interference as being the driving force behind his decision. McKaiser had been a presenter on Interface. Speaking on the ruling partners influence on the broadcaster McKaiser said, “There were no regular calls from politicians or Luthuli House to the SABC (so far as I know). But politicians do not need to call the SABC.” McKaiser then continued, “Self-censorship on the part of a sufficient number of employees suffices to keep our politicians happy.

Was BuzzFeed Right to Publish Accusations Against Donald Trump? 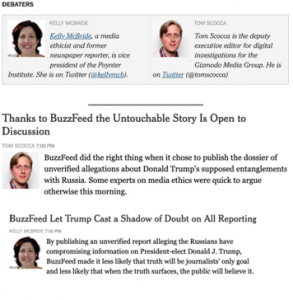 Seven political parties represented in the coalition that is currently governing in the City of Johannesburg have opened a case of corruption and bribery against the African National Congress (ANC).It’s alleged that a R150 000 bribe was offered to some councillors who are members of the coalition, by ANC councillors for votes in support of removing Mayor Mpho Phalatse.

The Hillbrow Police Station in Johannesburg was ablaze with political party leaders and members wanting to try by all means to avert the vote of no confidence against the Mayor.Taking their plight to the Hillbrow Police Station, these seven political parties in a coalition in the City of Johannesburg include the DA, ActionSA, FFPlus, Patriotic Alliance, IFP, ACDP and COPE.

Durban — The National Union of Metalworkers of South Africa (Numsa) said that inequality, capitalism and the high rate of unemployment of women in South Africa had made this country a war zone for women.

Numsa said it supports the demands for increased funding for shelters, community- based services, greater mental health interventions, and increased economic support for victims of abuse and sexual violence.

In a written reply to the Gauteng legislature on Tuesday, provincial MEC Dr Nomathemba Mokgethi said the tender was awarded to three companies belonging to Sello Sekhokho, who is the treasurer-general of the ANC’ Ekurhuleni region.

DA’s Shadow Health MEC Jack Bloom said it was strange that Sekhokho’s companies sold such a variety of goods to the hospital, including cleaning materials, office supplies and even groceries. Blood said:

“And it is suspicious that all the payments are less than R500 000, which means that they don’t go out on tender and are signed off by the hospital CEO.”

Answers to Above Questions

Answer 1: There are specific codes that have been built up by BCCSA in respect to the protection of children. It is important for all the TV broadcasters to comply with BCCSA codes while airing their advertisements. There are different rules in order to protect children from inappropriate advertisement and one such rule is watershed rule which allows for broadcasting of adult material during times when children are not likely to be part of the audience from 20h00 to 5h00. In the given case scenario of airing  of comedy series Bad Teacher on Mnet, a Carte Blanche advertisement, which includes displaying the abuse of a Welkom nanny on a 7 month old baby has resulted in the violation of BCCSA code of ……

If you believe that the content above belongs to you, and you don’t want it to be published anymore, then request for its removal by filling the details below. It will only be removed if you can provide sufficient evidence of its ownership.